Parents get sabers too!

It was unfair for the kids to get sabers so the wife and I get sabers now.
I have a light staff under way but at this rate itll be another 6 months.  Too many other projects.
She gets one that looks vaguely sith like with scratch marks for grip while I get two black and silver handled  more classical style.  Both handles are aluminum with a mild level of polish and the grip black is a duracoat for maximum durability. 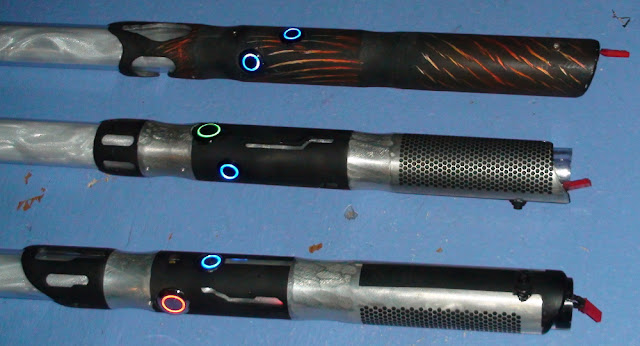 She got the bight teal on the top while I got an aqua and ice blue.  Hers is brighter because its a fixed LED while mine are RB and RGB.

For the internals I used lightsaberos for arduino as found many places on the net.  Modifed the code a bit, and after a lot of playing figured out a stack which allows an arduinonano, a sound amp, an mp3 player, voltage regulator etc all on one board.   later I further added a 5V boost because on powerup with high power blades we often got a brownout on the boards causing a reboot or glitch state.  a buffered 5V boost allows the arduino to stay powered at 5V even while the batter takes a large initial hit.

Further powering a few hundred milliamps up to an amp for the LED array takes a fair amount of fet power.  I milled aluminum heatsinks that socket some FETS and allow a set screw in the handle to press the heatsink into contact on the ID of the lightsaber aluminum tube turning the entire handle into ground and a heatsink.  Otherwise these fets overheat and blow within 30 seconds.  It turns out using red is even worse because it has such a low potential drop  compared to blue and green that the fet has to dump a ton of power.  Thus why people making red blades often run half of their LED's in series with the other half.  Blues have such a nice high voltage that the fets down have to dump much heat.  The quad fet below is powering an RGB saber. with two fo them running the Red led's.  The 6 fet sink runs the blade in segments with a common ground (or anode, I forget which) making the blade power up in sequence. 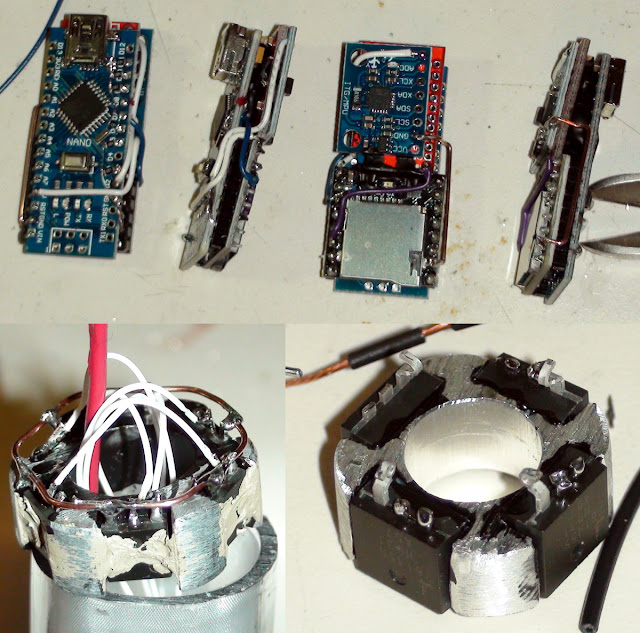