Finally found an excuse to break out the welder and teach myself to weld.  After some initial work on a house project I decided to prototype a battleaxe.  Many years ago i made a pair of wooden battle axes for my wife because we saw some she loved at the ren fair but didn't have the disposable to drop on 300 dollar each axes. 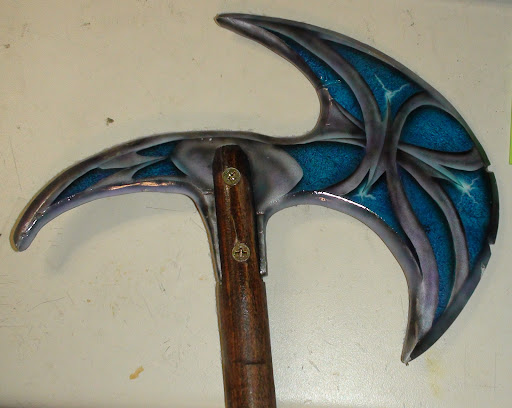 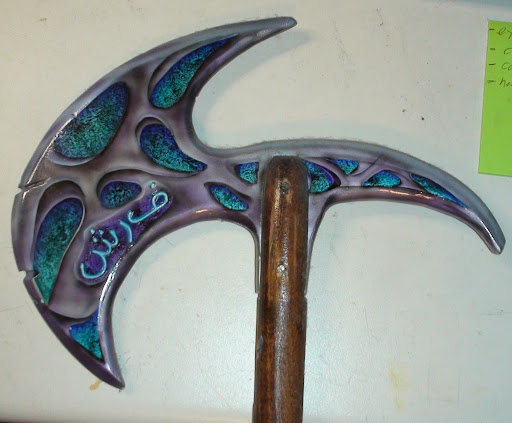 So maybe 15 years later I made my first battle axe.  This was a good proof of principal on the fabrication techniques and materials.  My goal is to make some nicer ones for a later anniversary. 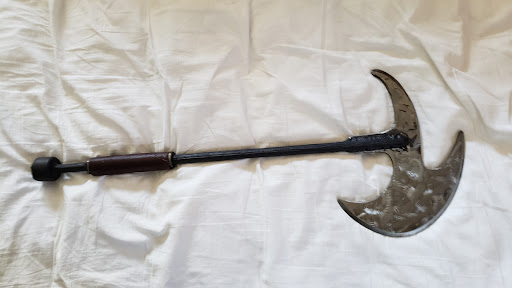 It didn't balance quite right so I lathed and welded a counter weight to the pommel.  Then for my birthday a couple days later used it to slice a piñata in half to the delight of my children.   Off with its head!

I was surfing for laser tag and laser guns a while ago and came across something called blackbeard that converts a rifle into a laser practice gun.  I thought this was clever as the module replaces the bolt and otherwise uses the normal trigger and optics of the rifle.  Well I love my airsoft but understandably its not safe to practice with them around the house even after the kids go to bed.  So I got a bug in me to convert my favorite KWA GBBR Tavor SAR 21 into a lazer gun, especially for winter months when propane guns don't work well.

Not my video but this one shows great detail about how it works, enough to reverse engineer and improve upon it.

First I took pictures I could find online of people who disassembled the blackbeard to see how it worked.  its simple and cute.  It uses a high gear ratio motor to turn a rocker that when the rocker gets hit by the hammer it triggers the circuit to do a partial to full revolution pushing the hammer back down.  At the same time it fires a laser down the barrel.
Then I took my KWA apart, extracted the BCG  took measurements and went through a few iterations of 3d printing to get something that looks like this.  Sounds easy enough and the trouble really existed in a few parts.  1 the motor.  After a lot of searching and buying the wrong motor a couple times i finally found the Endbots.com 20mm lightning 12v gear motor.  This has the appropriate torque to push down the hammer.   Next finding a nice tiny sufficiently powerful microcontroller, i settled on the Teensy because it was low power enough, small enough, and fast enough.  I did have to make an amplifier circuit as its output lines are very limited.  I also had to install some low pass filtration between the laser module, motor and microcontroller as they seemed to like to interfere with each other.  The laser was just a 5(20mw) laser pointer.  Two lithium batteries rounded it out. and...It had problems turning over.  It turned out you better be careful in what orientation you print the rocker to minimize friction.  I also used a small butane torch to fire polish the sides of the 3d print to reduce friction.   And don't forget, liquid electrical tape is one of your best all-purpose adhesives, insulators, fillers, vibration dampeners, and structural  goo's.  Helicoils are also your friends if there isn't room for nuts. 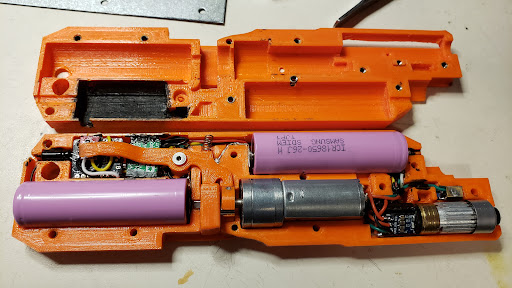 I believe this is version 3.  Now the beauty of using a nice little microcontroller to make your own is you can program ammo count, malfunctions and other behaviors into it.  I set the code to a random round count <=30 and after the counter reaches zero it pauses for 2 seconds to indicate you need to do the motions of a reload or malfunction clearing.   The tavor can be bought, if your lucky from redwolf airsoft. 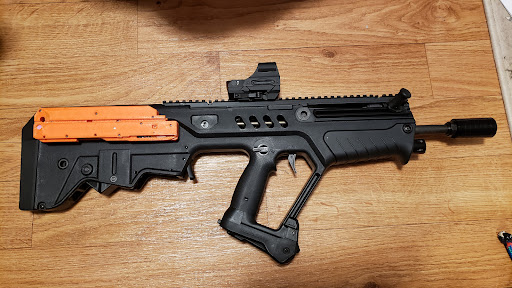 And remember, always treat an airsoft rifle like it can put an eye out,  Never point it at anyone who is not actively participating and properly geared up with face protection and always be aware that ricochets happen and thus even with a laser bolt you too should have eye protection in case you were wrong.

The electronic pistol recoil haptics turned out fairly well.  Not as powerful as pneumatic by far but feeling an impact for every shot with a pistol is nice.  And its compatible with the mamut stock cups adding only 1/4" thickness to the offset of the cup locations.  The battery pack is a trap on tripple LiIon  with two magnetic USB charging lines  that snake along the arms to the haptics.  This way if they snag it just releases the magnet.  The charge indicator on the battery is critical to ensure you don't overdischarge the lithium battery. 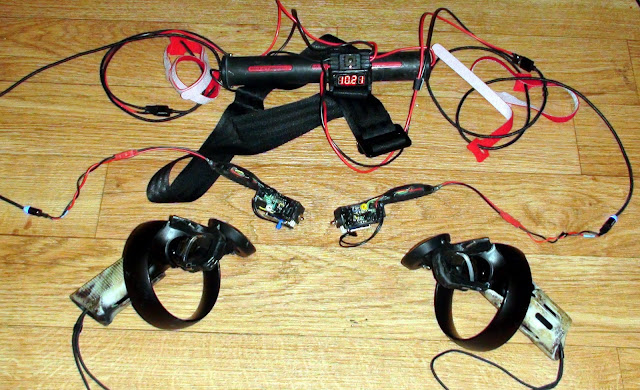 And Back to the pneumatic, I upgraded several aspects.   First I removed the batter pack since liIons should not be mounted on a jack hammer for fear they may short and ignite.   Instead I connect to a 12V supply via a magnetic coupled USB charging cable.   The cable snakes along the pneumatic line both on a quick coupling connector and join the stock at the 2 point sling.   The next upgrade will be the cylinder which should increase power and efficiency in the same volume. 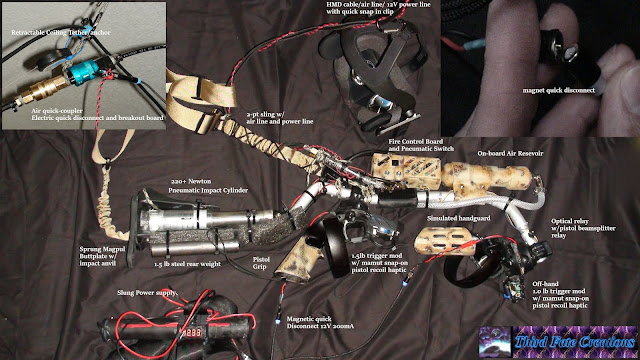 And a few tests in Onward.  Don't judge my getting my butt kicked by AI.  The recoil hack works well with onward.

EDIT: Note do not use LiIon batteries. The stock kicks too hard and after 10k rounds or so compacts the foil in the batteries.  Use a tethered 12V supply parallel to the airline or NiCd  NiMH or other batteries proven to take a beating with radio controlled vehicles.  (dont use LiPos without great dampening)

Decided to try this stock out in several games and record it for fun.
GunClubVR is pretty fun for a fairly static game.  Plenty of trigger time.

First, How hard does it kick.  This is difficult to convey so I shot a video of it kicking its own 5 lbs off of a floor.

Now for those considering a compressor...
I thought a bit should be devoted to air sources focusing on the
-compressor
-impedance of the air line
-and on board reservoir

The next consideration, or one of your first perhaps, is the air supply.  If you have a compressor in your garage, great.  but some may not have one or are looking for a replacement, or just don't want to hear that loud thing running in the wee hours of the night.  There are many options but one many may not be aware of are the "silent" oil-less compressors.

I originally bought a Eurotec 10A with a <40dB sound level.  Awesome for airbrushing but, it needed a tank.  So I ripped apart a coleman camping compressor took its motor out and kept the valves, couplings, and <1gallon tank.  Strap 2 computer fans on it and you have a compressor that shouldn't be run for more than 20% duty cycle or so that Ive ran for roughly 10 years now at well over 50%,  often up to 100% for 2 hrs straight and its still kicking.  Just remember to drain your tank.

Tank:  If your going to buy a tank and can afford it, get a corrosion resistant one.   Never fill it beyond its pressure capacity and make  sure you have a pressure switch on the compressor that prevents over pressurization.  Most have this already but if you go ripping parts off of your compressor, make sure you don't remove this.

However, if you are in the market for a new compressor a couple lines you should consider for low sound (IE wont drive you or your house mates nuts from the sound)  are the

I would avoid paash and anything that doesn't output at least 60Psi.  It will be disappointing.

I believe sparmax is the re branding of the eurotec 10A but it claims only about 40PSI where the pressure gauge I put on my tank says its consistently pumping up to 60PSI.     But I think the eagle line seems like the best bang for your buck in pressure, noise, and cost.

Regardless  pick the trade offs you can deal with, and make sure it has at least a 1 gallon tank.

Thinner lines tend to be more flexible but greatly restrict flow limiting power at the piston.  Feeling the restriction of thicker lines and their affect on your movement may constantly remind you your playing a game, which is less fun.

I recommend a braided hose, either a modified airbrush line or an ultra soft compressor line for the last 4-8ft,  then whatever line you can reasonably afford to go from your tank to your rig.

I mount a quick coupler above my head with the cable tether and anchored it to make sure it cant swing down and nail me in the head.  The airline regulator is mounted there too for ease of adjustment.   I then cut a cheap airbrush braided rubber hose and re-connectorized it for my setup.  I then anchored it loosely with para cord to a few points along the sling so in game I barely know its there, I just feel the sling.   A few small carabiners on the back of my VR HMD and along the cable management tethers and I quickly snap the airline into place when needed, hook up the quick coupler and Im ready to rock.   Also the quick coupler is useful to stop explosive air bleed out when you disconnect.

ON-BOARD RESEVOIRE:================
So making tradeoffs, there is still more restriction in CFPM than Id like limiting the power of the cylinder, especially after the first shot or 3.  This can be mitigated a bit, unless your a fan of full auto, by putting a small reservoir on the stock.

I used PVC pipe and end caps, as well as appropriate PVC glue to make a small pressure chamber.  Beware, you are making a small pipe bomb so read the instructions and use the glue/welding sludge correctly!  You don't want the pressure chamber exploding in your face while playing.   Take care and take precautions and don't get anywhere near the published pressure limit of your materials.

Ok we have a device that works and works pretty well... but something is still missing.  Got the grip, the trigger, and the recoil... but the nose is left out.

So we make a scent module.

This one takes advantage of the vent gasses and uses the restricted line with a reservoir to make a scent chamber.  Simply take some wire mesh (large surface area) roll it up, and burn something (paper, charcoal, fireworks, on it SAFELY.  don't burn your house down.  do small quantities at a time,  very small. 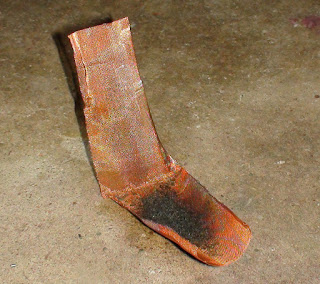 Once you have enough blackened toxins (yes burned stuff is usually toxic so don't overdue it) roll it up and spray some machine or gun lubricant into the mix. 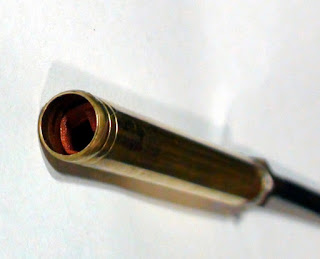 Now seal it up and with every shot you get a faint whiff of motor oil, burned metal, and fireworks... not perfect but noticeable for the immersion.

For an electronic version you could simply put a fan on it to turn on with every firing.   Plus the filter and reservoir help to decelerate the mass on the return stroke so its multi use.