Probably just a few hours left on this guy. The hard parts are all done, just a minor bith of weathering and lighting and finish off the guns and exhaust ports. . 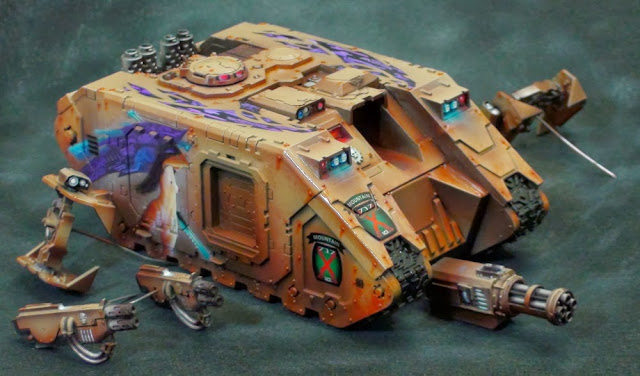 I printed off an array of decals but decided just to use 3 of the largest.  So I guess there will be plenty for him to put on his marines if he chooses. 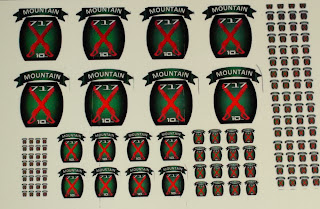 When in doubt, Skip to the HARD PART

I decided enough of the base was done to just skip ahead to the punch line and focus on getting that right before going back and doing the simpler stuff. 100% airbrushed, and sadly about the limit of my skill, but I do see paths for getting better now that Ive actually tried painting a tinny person with an airbrush. 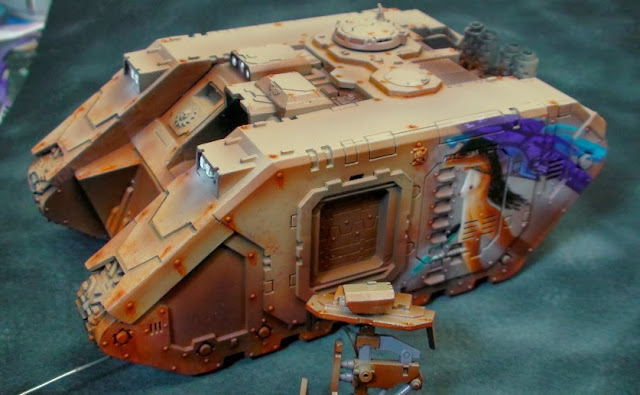 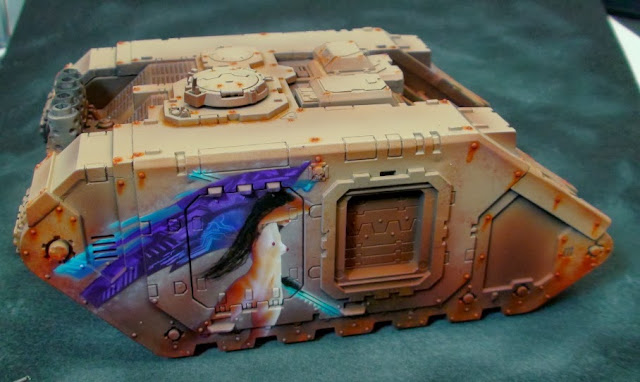 Probably a tinny bit more work on the chainsword and blending her.

Something fun for the land raider.
A custom banner transfer for his unit.  Itll get a bit more work but this is the first step. 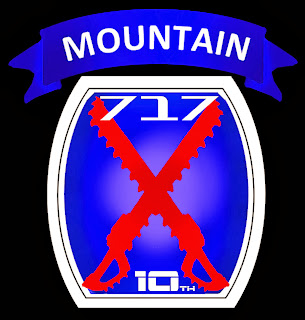 edit: requested a change to not be confused with UM's  THis may take a few iterations but they are easy iterations 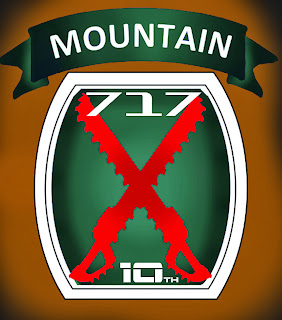 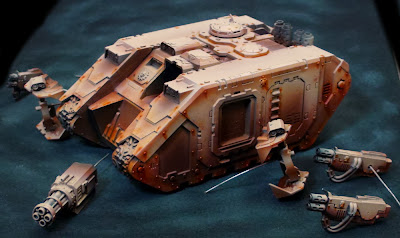 
These past 2 weeks I was just starting to make progress on the Zep.  Not sure on names yet, any suggestions?  I was contemplating Pandora, Trident, Cerberus....

The patches of different camo panels are "salvage" from when this was no longer officially under the control of its native empire (not sure if it will be the US or Germany) so it is officially a pirate zep even though its crew primarily still targets the same enemies while operating deep in enemy territory.  No longer having access to the shipyards back home its crew had to resort to cannibalizing enemy zeps.  Ill probably have a few emblems or hull markings from said victims.    This kitbash incidentally consumed over 70% of my leftover bits.  Ive been suffering ever since having few bits to use for modifications.  Its probably about 40%  complete  I am about 50% complete on putting rivets on the panels, if you look closely.  I have uniform rivets for the original repairs, but plan on using irregular "in-the-field" salvaged rivets for the salvaged panels.

Then a Landraider  Achillies pattern, came.  Commissions before zeps!  This one is going to take probably about as much work as I was planning on putting into the Zep. Challenge accepted!  And Ill be playing with some 15mm troops in parallel when I need a minor break. 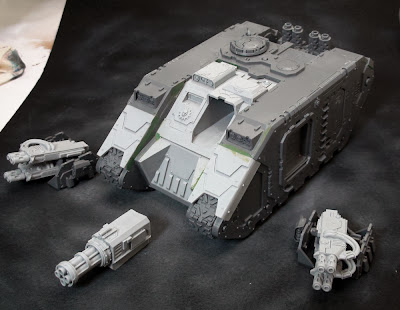 Edit:
Been putting this off because it isnt as much fun as painting.
I finally got a few more production casts of my retro-sci-fi 28mm vehicles
Given the costs Im probably just going to go until the molds break and call it done.  I got enough for my games=)
Right now Im still on a email to order basis since volume is low and I dont anticipate it going up much. 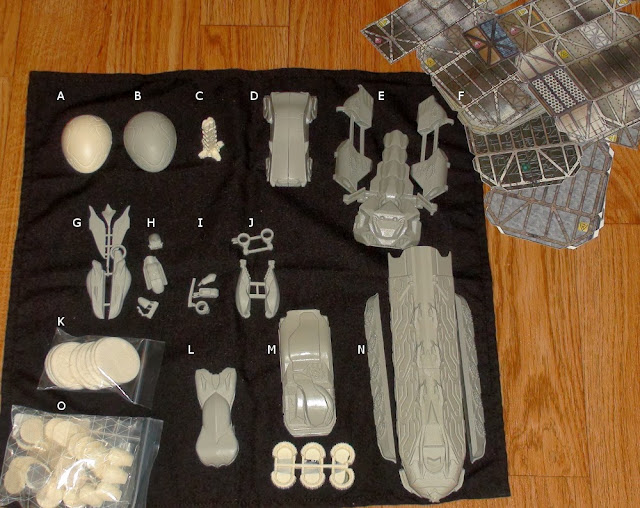 Energy fence post--- Only sold with energy fences... contact me for details as these are painted custom.

I like most stealth designs and picked this guy up a while ago.  Finally thinking about some models from Antenociti  and Khurasan I was decided to paint this guy in a scheme that would mesh.  The basic theme, a near future version of the stealth helicopter with active camo for a night run. The carbon mesh was painted to barely be visible compared to my previous carbon jobs.  A violet hue to the rotors as a one atomosphere plasma to reduce drag.  A further plasma from"circuitry" painted in certain areas actively cancel radar coupled to focal points before the radiation transmits out of the hull plating. 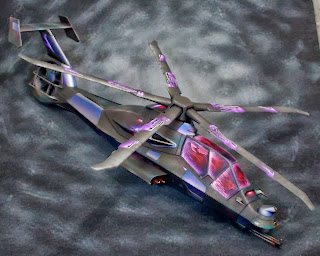 Next: a friendly reminder CLEAN YOUR BRUSH.  You should be cleaning it after every use, and I typically clean the nozzle before every use and every hour.  However, unless you are very studious good small traces may slowly work their way into the air channel.  Once this is clogged its game over without an ultrasonic cleaner and acetone or similar solvent.  Remove all gaskets before soaking in solvents. Clean these by hand with alcohol.    I do a thorough breakdown and clean about twice a year. Its amazing how much can get into little nooks over time without adversely effecting the brush. 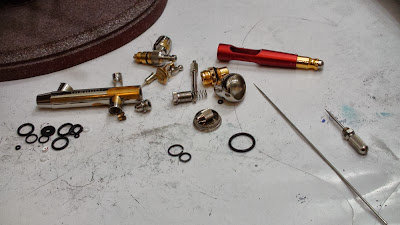 Finally a WIP of a 34" kitbashed zeppelin.  Its a heavy cruiser with plenty of firepower and can launch up to 10 fighters or bombers.  I think Ill go absurdly exotic with it, as per my norm. 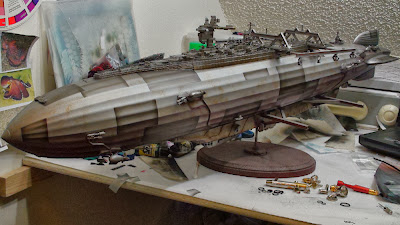 Just finished the BSG/ISD commission.
He wanted the galactica to be mostly monochrome, the Pegasus to have a bit of color compared to my previous pegasus, and the ISD roughly a copy of my previous ISD.
99% airbrushed.  I used custom transfers for the "galactica" , "Pegasus", and the colonial emblem on the top of both.    Then used a bit of airbrushing to blend it in a bit better. 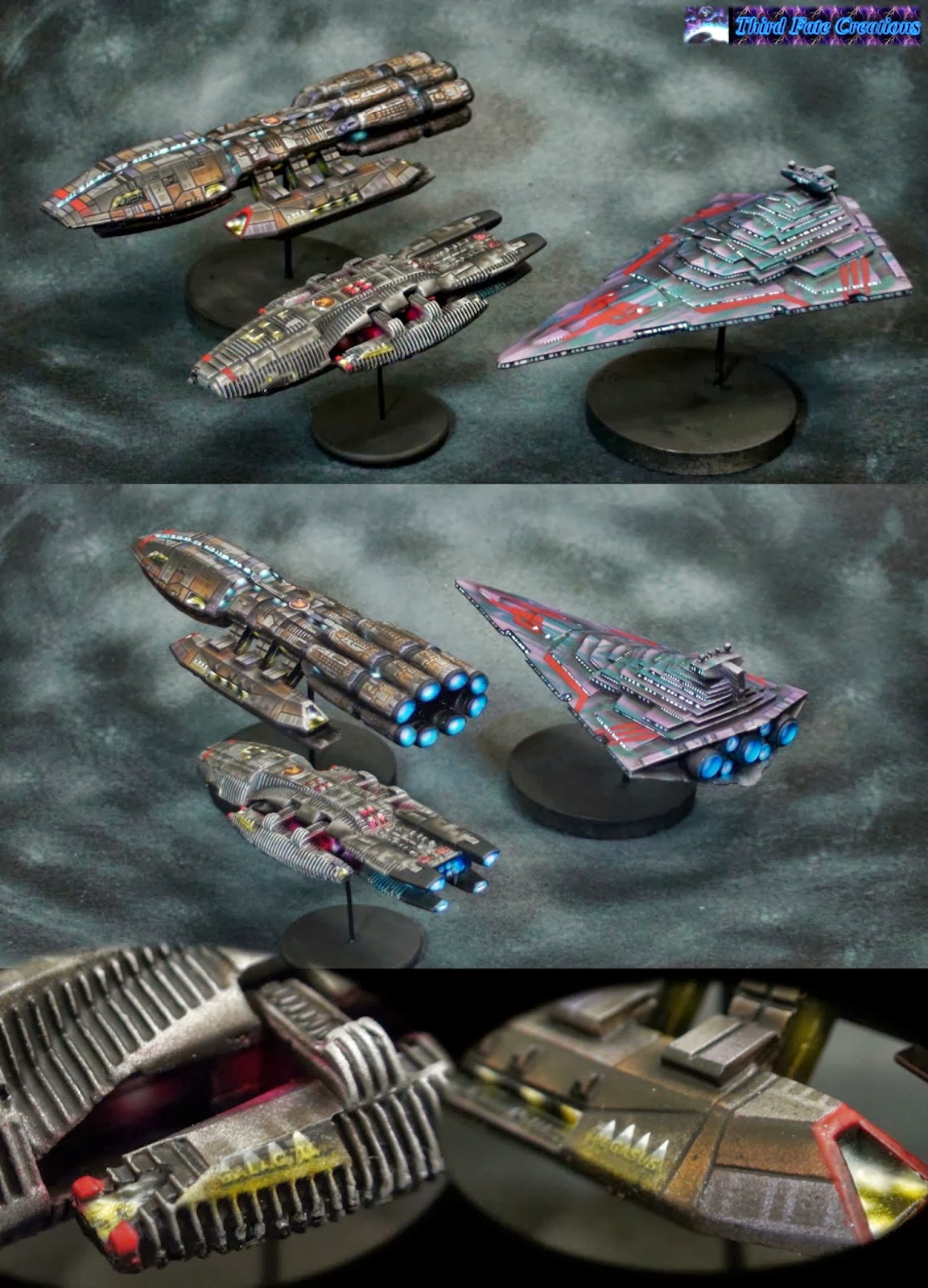 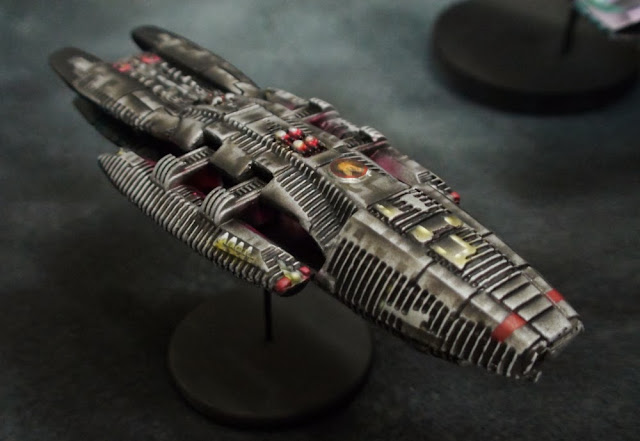 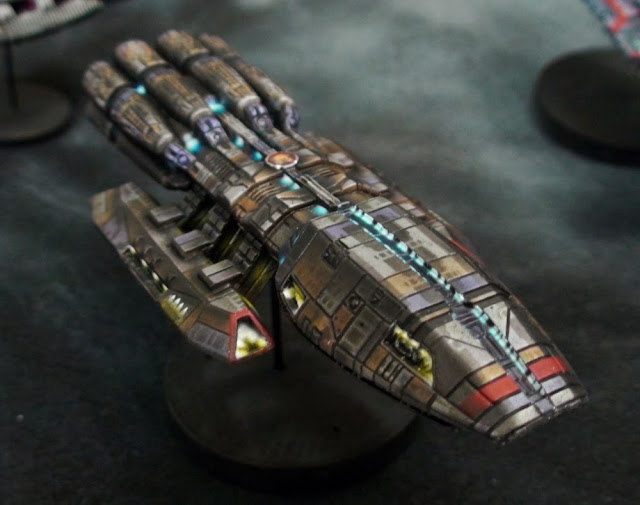 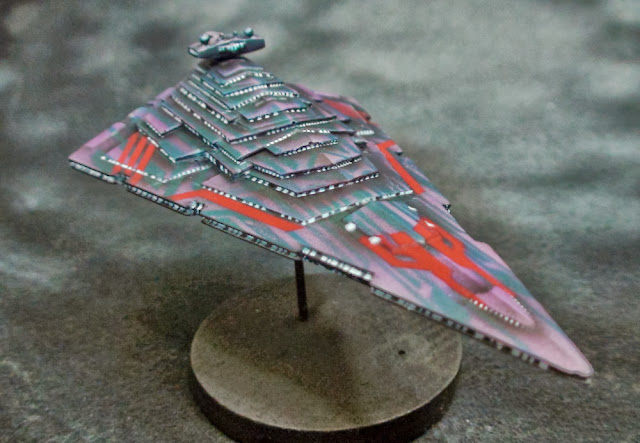 I hope he likes his new toys!

Shipyard is in full swing  WIP

Look like its another starship commission!. A ravenstar galactica, a Fox miniatures Pegasus, and a Studio Bergstrom ISD.  The goal here is mostly gray's, a bit of color on the pegasus.   and a bit of violet on the Imperial star destroyer.  First lets get some high contrast to pull out the details.  and in the BG you see some of my custom bases mixed with a couple from Antenociti and a walker from dropship commander. Its going to be a sectopod, or equivalent in my UFO game.  I think I overdid the contrast on the galactica, Ill have to tone that down a bit. 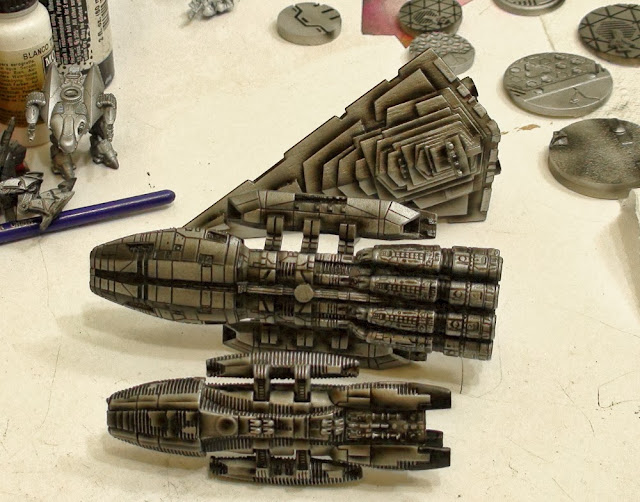 Hadnt intended to post until I had somethign else at least halfway done... but I was shifting some stuff around for painting and found this!   My daughters birthday present.  Oh well, she will get it tomorrow morning only a few days late.  It took about 3 hours to paint. She helped pink the sword. She has much better airbrush control than she did when she was 3 years old.  Go figure.
She had asked for a fairy, a princess, and a rainbow.  I didnt feel like doing a princess so I did a hummingbird (had a stencil to make that easy) a fairy (easy enough composite stencil) and a rainbow... just easy.    For the sword she wanted pink and was amiable to lightning.   I may one day put wings with green goo on her sword and tell her its evil fairy wings.    The sword shall henceforth be known as the fairy whacker.  A most efficient weapon.

My Burrow under the stairs


Since the move a few months ago I no longer paint in a spare bathroom, I now paint at the bar.  This house had a tinny sink just under the stairs apparently to entertain guests.  Well I dont drink but I do need a sink for my airbrush so.....

I installed a child gate to keep the kids honest  ish, a medicine cabinet to hold paints, and modified some shelving.  I like that the sink is Stainless, I dont have to worry about cleaning it as frequently... or ever... 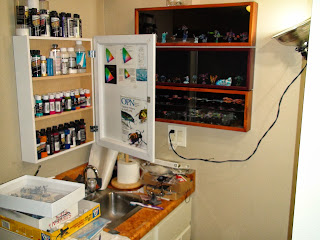 Turning opposite the sink my little alcove.  What I like about this space was it came with shelving.  I used a hammer to pop the top shelf out and slide it forward 20 inches to put a box fan and 2200 house filter to catch over spray.   Its a great way to focus the airflow.  A bit of track lighting on a fully white small area and we are ready to paint.   On the left we have a hair dryer, an extra light for pictures, and on the right a few color charts and cleaning supplies.  And an active project, a 1/48th scale RAH 66 commanche. 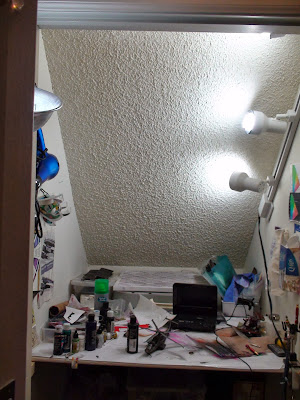 My trusty 5+? year old eurotec 10A is still cranking away.  I installed 2 computer fans to keep it cool lest it overheat.  That little guy has really cranked for me. Two moisture traps, a 3L roughly airtank and regulator make this a pretty hardy little compressor for small and medium mini projects.   What you don't see as you can imagine are the cases of minis and paints from all over.  Plus quite a stencil collection.  One switch hits the lights and mini dvd player more for sound than video.  Then a second daisy chained switch hits the compressor, cooling fans, and filter fan. 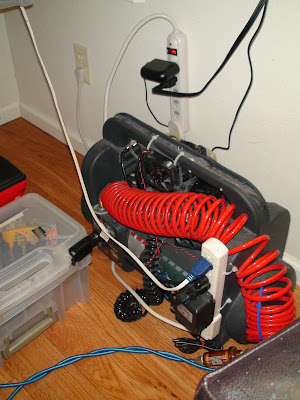