A second commission had me painting three VSD's for starwars armada.  However one of them we decided to play with opening the bays... because I really wanted to and he thought it would be a good idea too=)  With a bit of searching online to see how to split one of these guys open we found what I needed and I then went to work hacking the bays out and remodeling them to look like they open up to launch or receive fighters en mass.  I like the landing lights leading to the blue atmospheric force-field... Maybe someone will want me to light up a VSD next....

new tough challenges please! There are also a few new interesting Titans out there that are screaming for a nice paintjob.

Since ive already shown the first of the 3 VSD's I wont bother showing its twin as it's very similar. 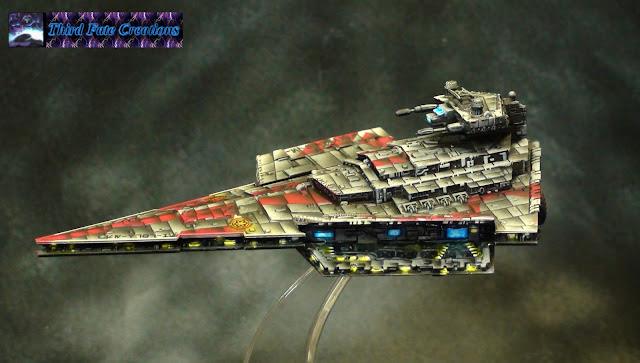 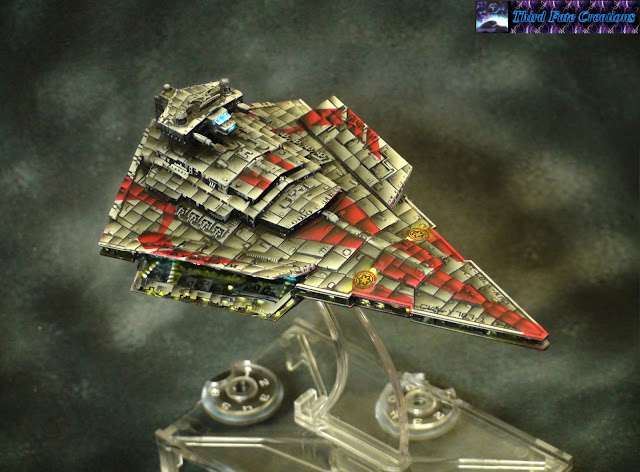 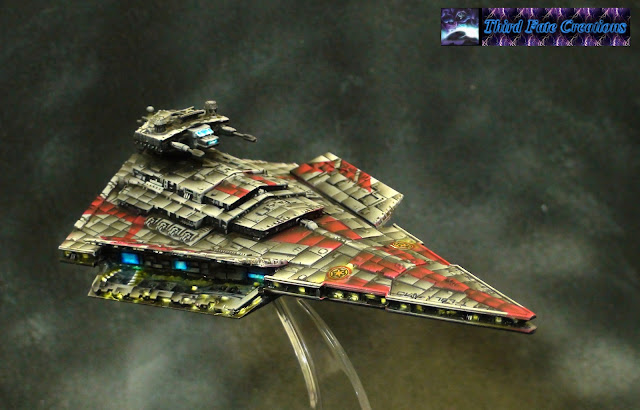 Assault Frigates Back From the Front

Painted to look like they had several armor panels replace since they left dock, several replacing badly damaged section leaving discontinuities in the damaged armor panels.  I left the bottoms darker to add a bit more depth and scale to these guys.   However, since they are very similar looking, here is just a single set. 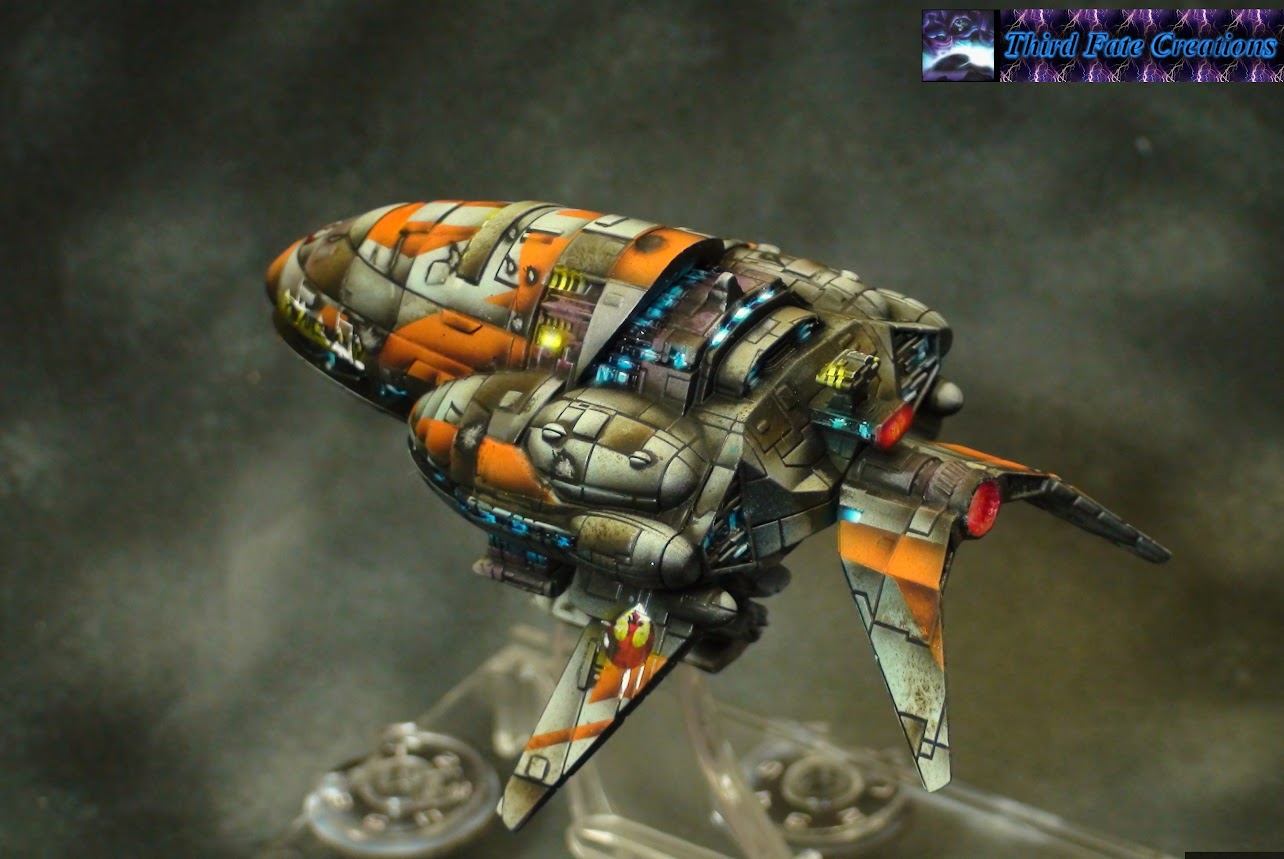 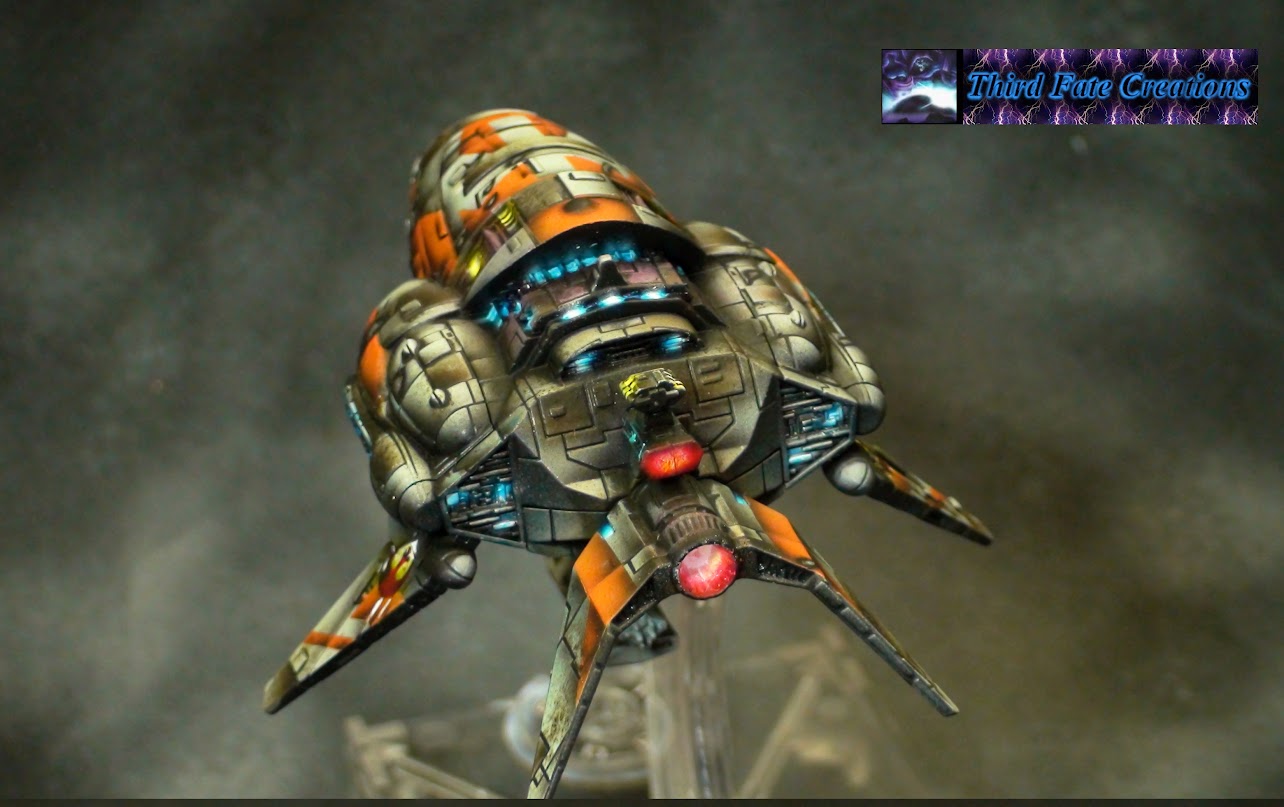 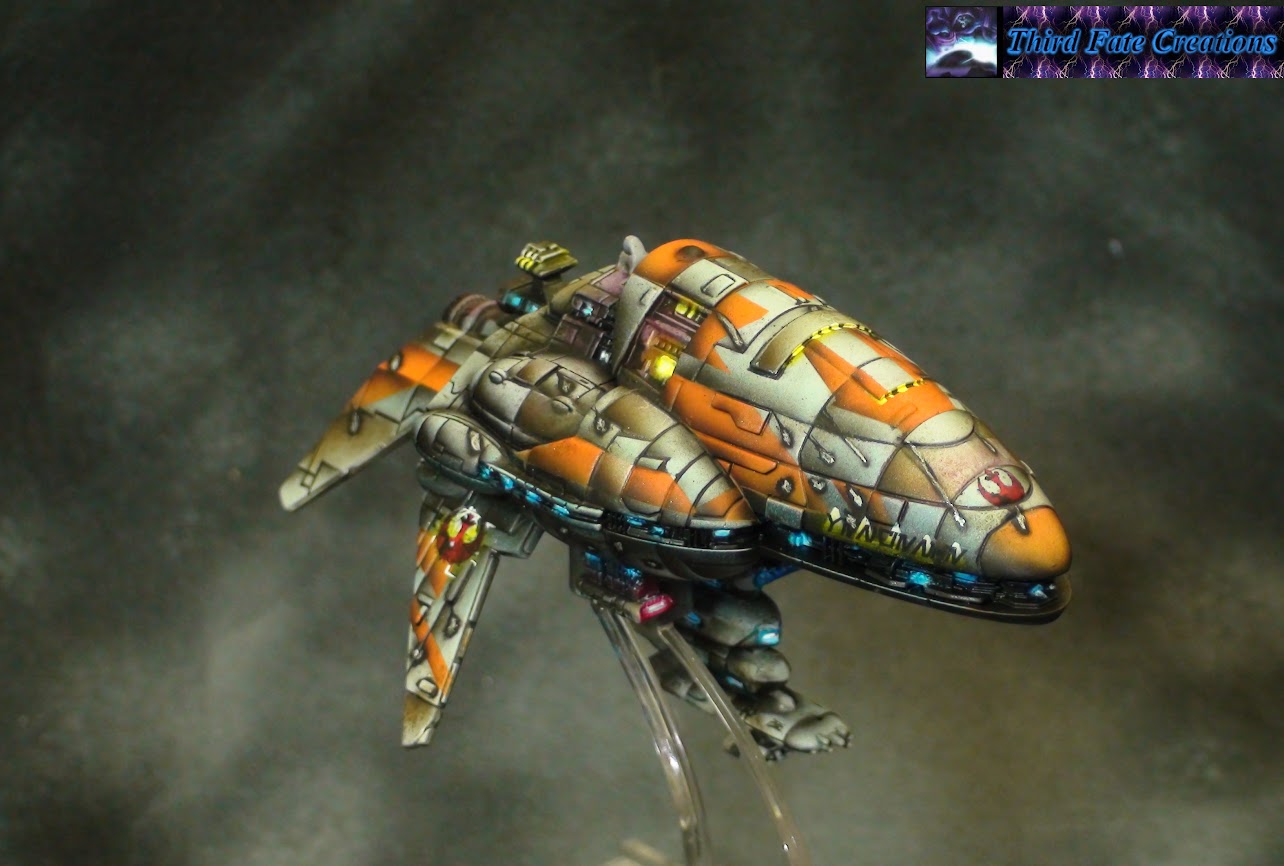 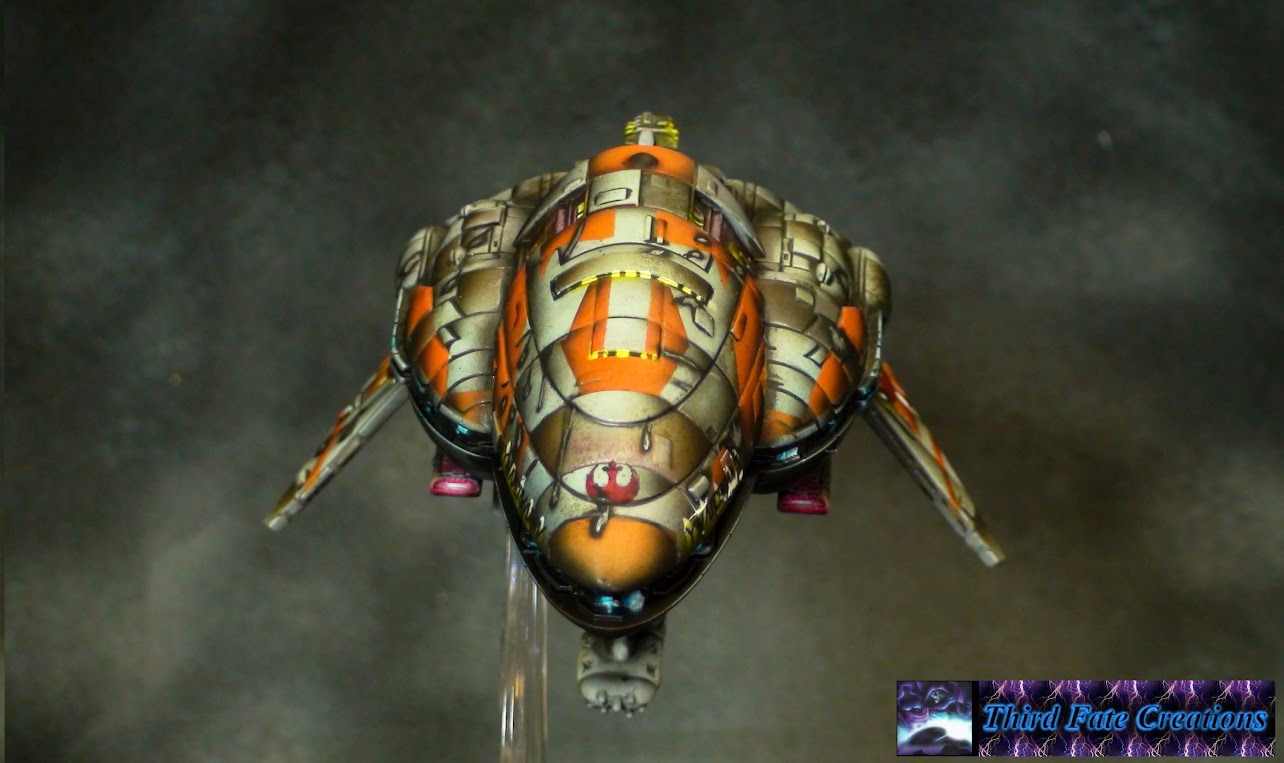 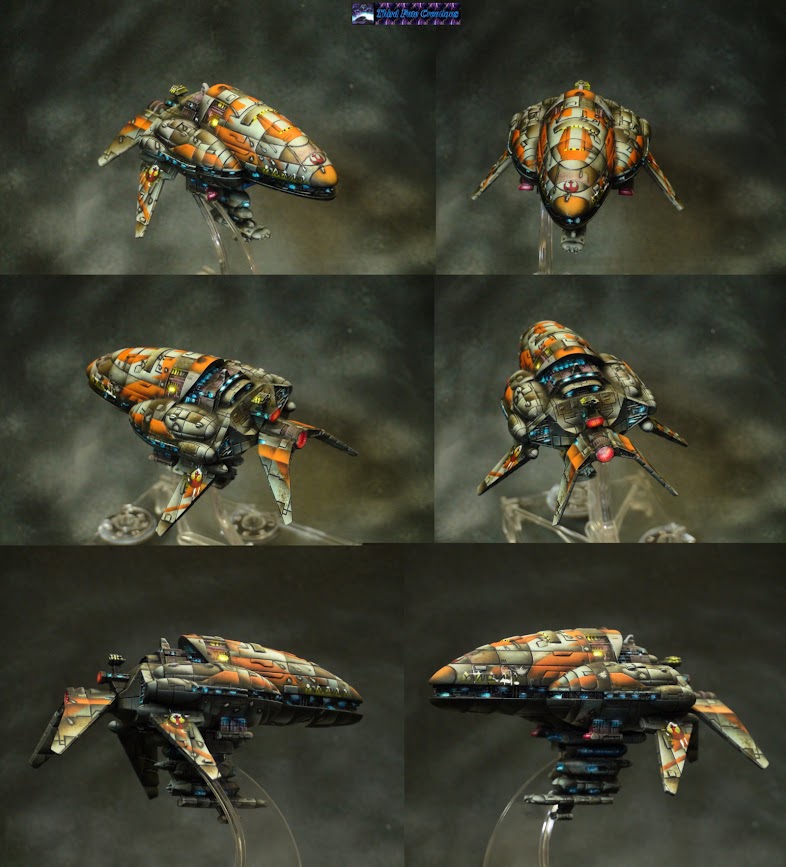 Starwars Preview (armada, not the movie =) 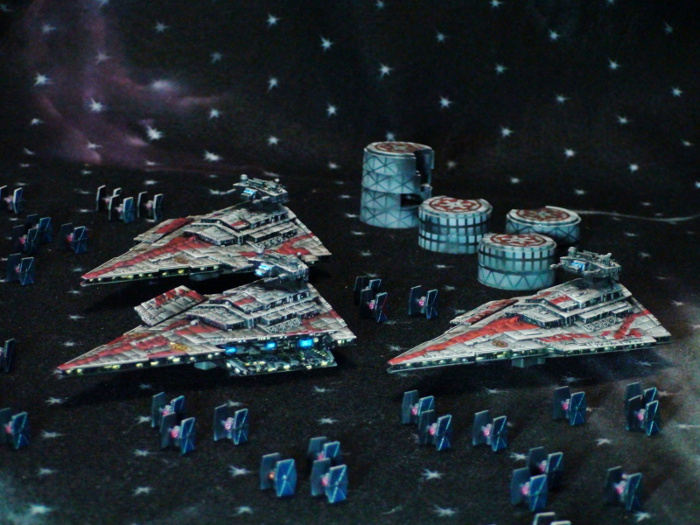 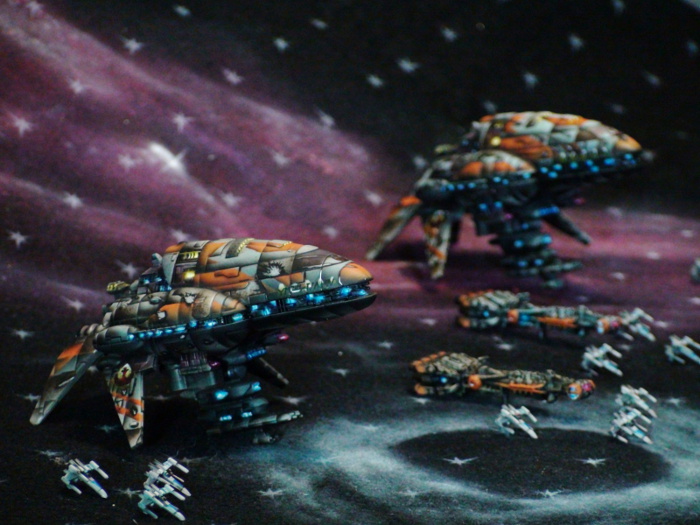 Knight of the Oldest Repulic...

Well I dont know if the Eldar believe in republics but you try telling him whats what.

This is the second of the wraiths painted, and since GW gave this guy so many parts he is quite articulate with only minor part modifications.   This guy is magnetized and pinned all over to hold this pose yet still be dismantled.  And every weapon shipped with him was painted and magnetized as well for near complete swap ability.

My marching orders on him was "dynamic"  so I figured this guy, in capable of flight like the revenants would rely on running.  Therefore I decided to have him charging across the battlefield lopping off heads with abandon.  Lesser units get out of the way or be bisected.  Greater units.... Go for the kneecaps!  They'll topple like an OAK!!!

Oh yea, I also had to have him make some sense carrying cannons instead.. .boring cannons.   So the second set is of him cannonized charging by ventilating the stuffy marines and nids. with high energy discharges. .

Wraith Lord.. Or is it Starlord...

Finished a commission for a wraith lord and wraith knight.  Now I just have to slog through the hundred pictures.   I finished this set for the Wraith Lord though it was tough as he has quite a few weapon configurations and the Client paid to have them all painted.   Well I cant paint something and not take a picture of it...

Both this and the upcoming Knight were painted with their sword as the primary motivator for the pose, but the poses were also done to make their alternate weapon configurations look reasonable.   The Lord, being a lithe little guy (yea little compared to the titans ive been doing lately) has been posed to be in a deeper stance than his casting allows but about another 10-15 degrees on one leg which I cut and rescultped.  He wanted poses that were more dynamic than most people do so...Since I wasn't allowed to make him jump or fly(admittedly wouldn't make sense but I like dynamic challenges) I decided a quick turning dodging stance as he beheaded an aggressor who thought flanking a Wraith Lord with a sword was a good idea... It wasnt.

And obviously the weapon glow in the first picture is edited.

Also, Thank you to Nadya of HopeRiver  for the referral.  Looking over her site it was impressive and I had to add it to my inspiration list on the right of this blog =) 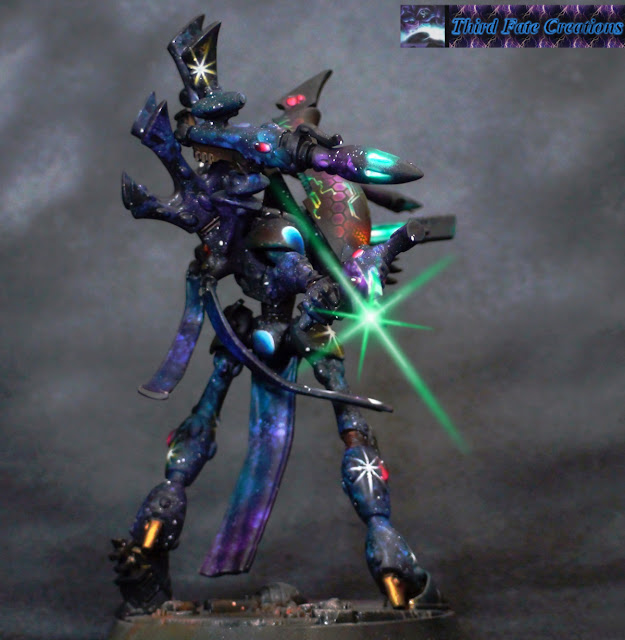 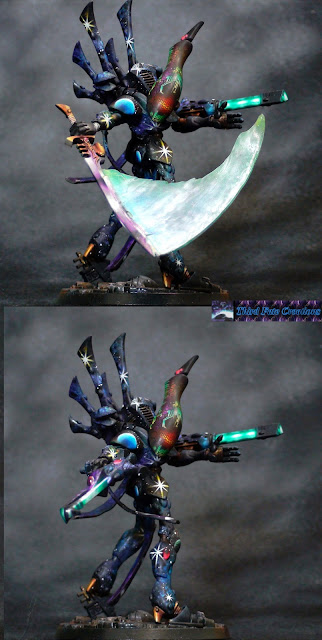 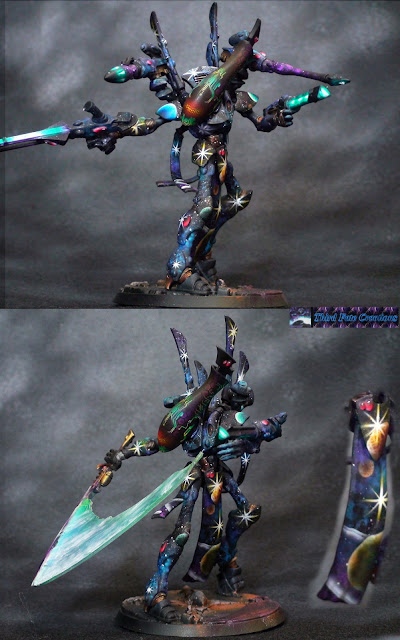