As is obvious I haven't painted in a while due to a variety of reasons. but as  I almost never stop creating in some manner  (hence Thirdfate Creations)... Lightsabers!

We've had some target FX light sabers for a couple years now and I was sad I missed getting all the colors they had back when they were only about 25 dollars during after Christmas sales.
So... I stopped whining and made my own.  The kids got the first versions while I figure out the bugs.   The guts of two collapsible sabers with sound from target were used as a sound board, then I went about making the blade based on kid color preference, using lighter materials that were more robust than the store sabers, and digging up some SOT fet's left over from my micro-drone builds and got to work.  For the hilt I was originally going to paint PVC to look cool but stumbled upon a way to fire PVC (with excellent ventilation,  a breather mask, and a propane torch) to make it look like wood and give it a finish that is tougher than all but the most expensive paints for adhering to PVC.   Then just a bit of spin doctoring to convince the kids they were fairy sabers, not a hard sell, and viola! we have version 1 woodland jedi or fairy sabers. 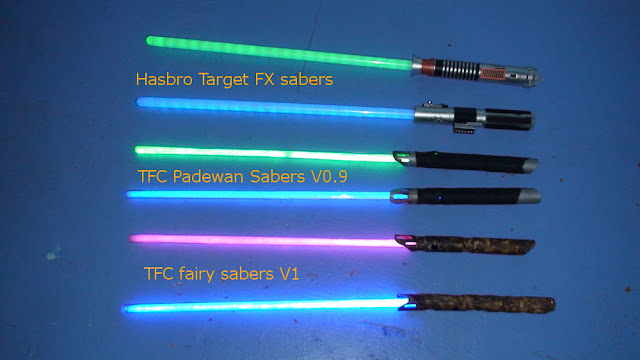 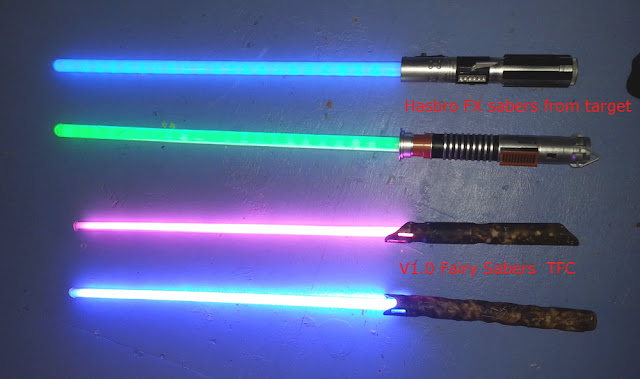 Now to do some for myself, My wife,  a niece,  and a couple other kids who desperately need sabers.


Just finished another set for a friends kids. Since I wont be on hand to do repairs I made the internals painfully simple and lowered the LED current draw from 1.7 to 0.7 amps so they should last a loooong time.  I also rand a secondary wire up each LED string to ensure that even if a solder joint fails the backup wire should keep the string lit for a long time.  And I included a bit more padding about the LED's to ensure they will take the stronger beating a couple boys will give them.  Camera flash was on. 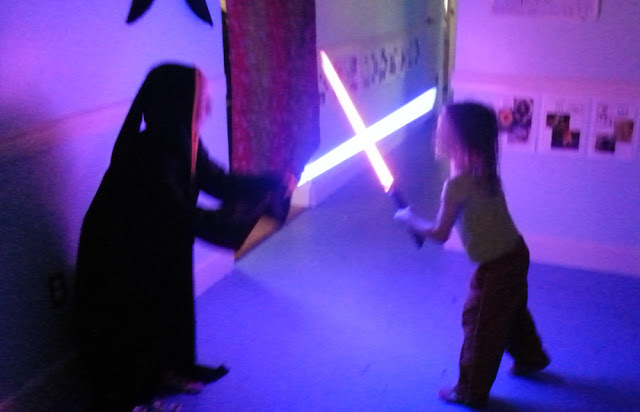 And let the munchkins go at it!

Now,... I have some starships sitting on my painting bench crying out for attention...and a mech...