Trigger Pull/Trigger Guard:  -----------------------------------
Seriously even an airsoft GBBR has trigger pull of half a pound or more, at least for the better ones.     The Oculus has a trigger pull of about 1 Oz  This I had to fix and the fix is fairly simple.  First you cant replace the spring easily as its hard to get to, and you may damage a flex cable, so leave the internals of the trigger on the touch controller alone.

With this mod, you can no longer just slap the 1oz trigger, you have to carefully squeeze and use better trigger discipline.

A 3d printed frame that clamps or mounts to the front of the controller giving a fake trigger that you pull which releases with more force and more crisply is fairly cheap and easy to implement and doesn't necessarily have to change the base controller at all.  With the right clamp on or wrap around design it seemlessly converts your shooting hand to one that learns a bit better trigger discipline.   And please remember to always keep your finger off of that trigger until your ready to pull the trigger on a valid target, even in VR!  Thats what the trigger guard is for!   *sigh... seen a few buddies get shot by some idiot screwing with their rifle stock in VR at the start of a match* 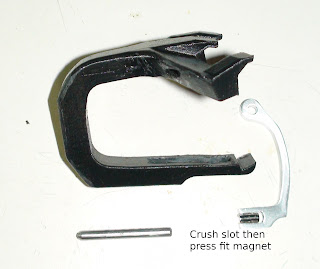 You will want to drill out the 3d print's trigger pivot hole to 1/8"  and the magnet for the trigger pull force  to about 4.6-4.7mm for a press fit. Do not glue either! 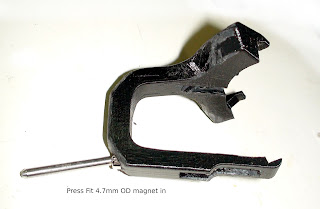 Glue trigger magnet in, wipe excess away,  leave a bit on the end to prevent impact damage to the magnet. 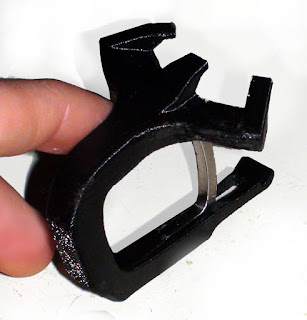 A completed assembly ready for installation. 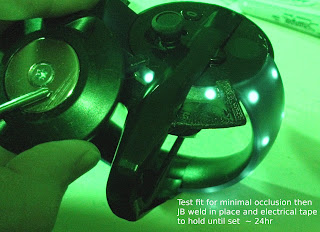 Use your phone to align the assembly to the Oculus touch to minimally occlude the LED's.
lightly sand all interface surfaces then apply a thin layer of JB weld.  Tape over any moving parts or parts you dont want epoxy getting on to so you can later remove the tape  and extra glue. 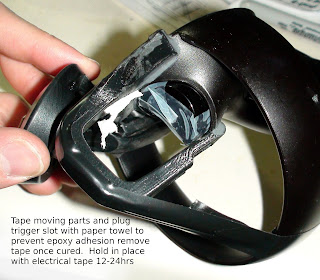 Let it Dry overnight 12-24 hrs and your ready to rock n roll.  Adjust pull weight by slipping thin layers of electrical tape between magnets. This also dampens the impact and reduces VR gun bounce due to impulse.  Use a food scale to adjust to about 1lb breaking force.

A bit of green epoxy putty helps brace the trigger guard to the Mamut mount to help transfer stress and load bearing up into the stock without stressing the ring on the touch controller too much. 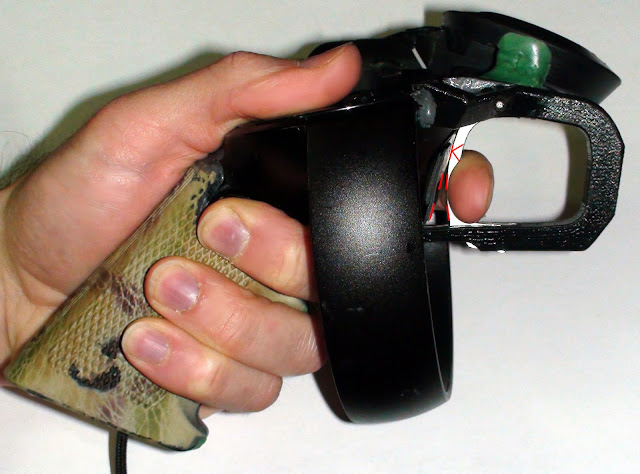 Finally, if you choose to cut up a cheap airsoft pistol grip and install it over the controller.  Use a respirator and vaccuum before cutting and dremmeling out the inside as many are glass filled nylon.  Cut it down the center, then trace patterns for the button and form fit.  Then dremmel out the inside to mold around the controller.   Tape sections of the controller with scotch tape to prevent gluing the controller shut, then very carefully glue the halves onto the controller.  Take special note to protect buttons from glue.  Also take extra special note that the side with the battery cover is taped entirely around the battery cover so glue only dries to the cover which slides off.   Perhaps we can get someone like Mamut to make overmold pistol, 1911, glock, handguard grips.... Hint hint. 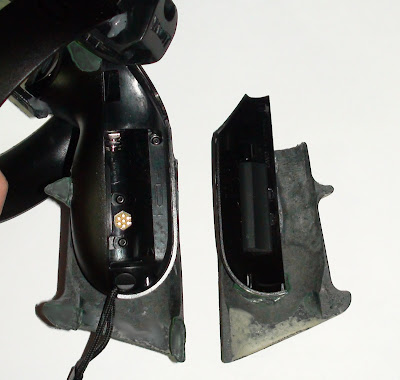